When we were in Jaipur, we made an effort to hit two hotel restaurants we wanted to try. We had lunch at Samode Haveli to check out its impressive interiors while dinner was at Laxmi Mishthan Bhandar or LMB, an old institution that only serves vegetarian dishes.


Samode Haveli is a heritage hotel which used to be the manor house of the Royal Family. It was built 175 years ago and reflected the style of the family  and architecture of the times.

Samode Haveli has been beautifully restored and is perfect for travellers who want a unique and memorable experience.

Having a meal at Samode Haveli means eating at the former dining hall of the Royal Family. It's a magnificent room adorned with colourful hand-painted murals. 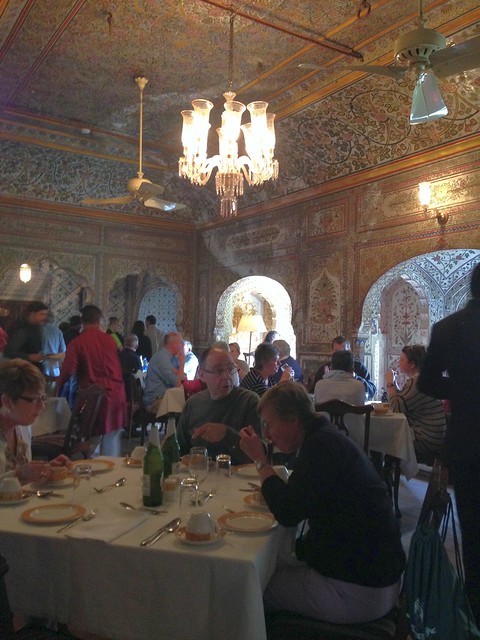 There's a choice between traditional Rajasthani cuisine and international flavors at Samode Haveli and we decided to order a mix of both. The food was average but the ambiance more than made up for it. Make sure to reserve in advance when dining here.


Laxmi Misthan Bhandar (LMB), on the other hand, is a local hotel, sweet shop, and restaurant built in 1954. It's supposed the be the first 3 star hotel in Jaipur. 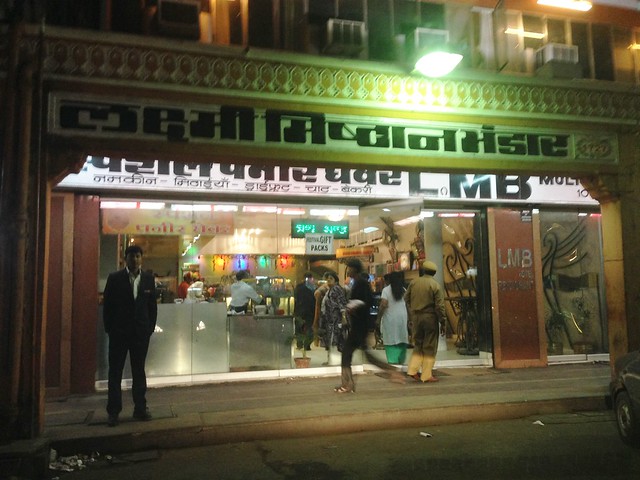 The sweet shop is especially famous for the tempting sweets and snacks displayed behind the glass counters. 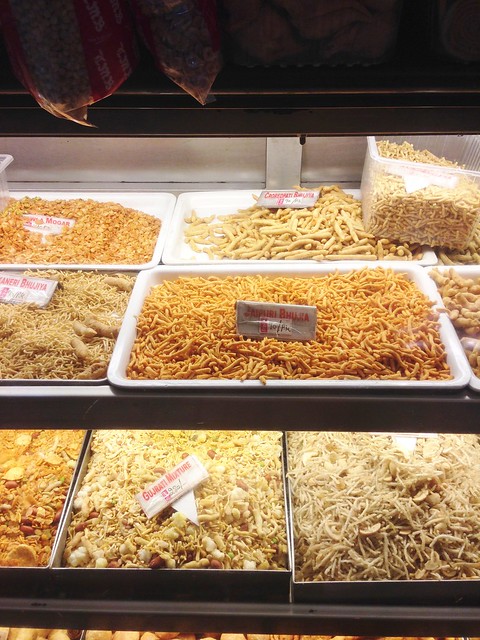 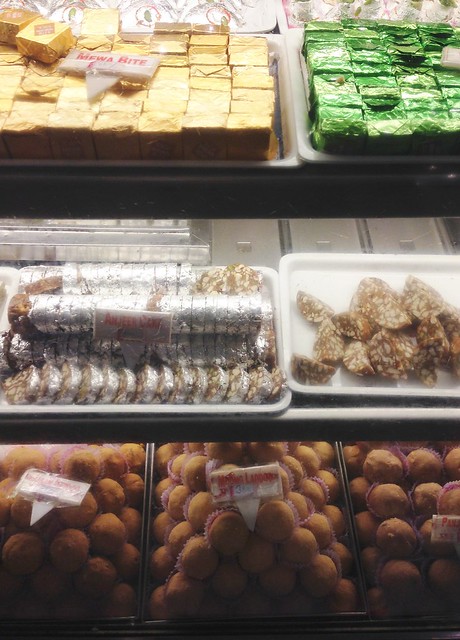 The restaurant at LMB is strictly vegetarian and doesn't even allow the use of onions and garlic in any of its dishes. It goes without saying that alcohol is also not served. 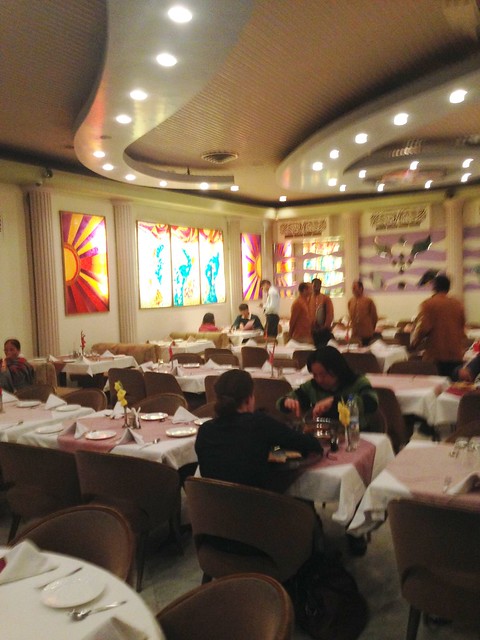 Eating at a vegetarian restaurant was a challenge because I love my meat but I was able to survive by eating lots of breads and potatoes!!! While eating at LMB was not exactly filling, I did appreciate the authentic Rajasthani experience I had.

The Golden Triangle tour is recommended to first time India travelers as it covers top tourist destinations Delhi, Agra, and Jaipur. We followed the Golden Triangle route and explored Jaipur during our fifth day in India.

Jaipur is popularly known as the Pink City because most of the city was painted pink to look like the red sandstone architecture of other Mughal cities.

We spent a day touring Jaipur and here are the attractions we visited:

1. AMBER FORT
Amber Fort is the most visited attraction in Jaipur and is perched on a hill overlooking Maota Lake. It was built by Raja Man Singh I and is known for its artistic style of blending both Hindu and Rajput elements. 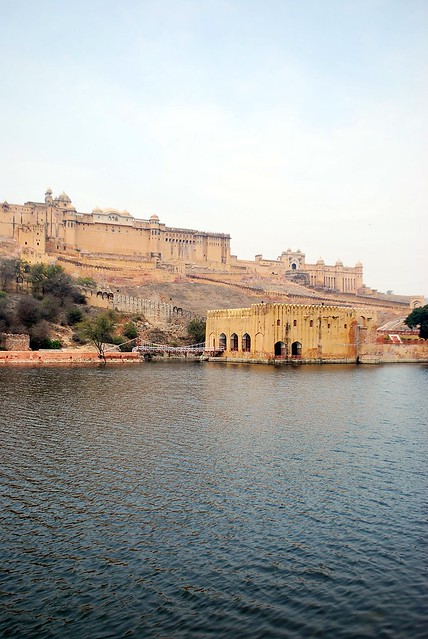 We made arrangements to take an elephant going up Amber Fort and we had to wait in line for our turn. While waiting, vendors were eager to offer books, turbans, and shirts. Just remember to haggle up to just 10% of the initial price because they do take advantage of unsuspecting tourists. 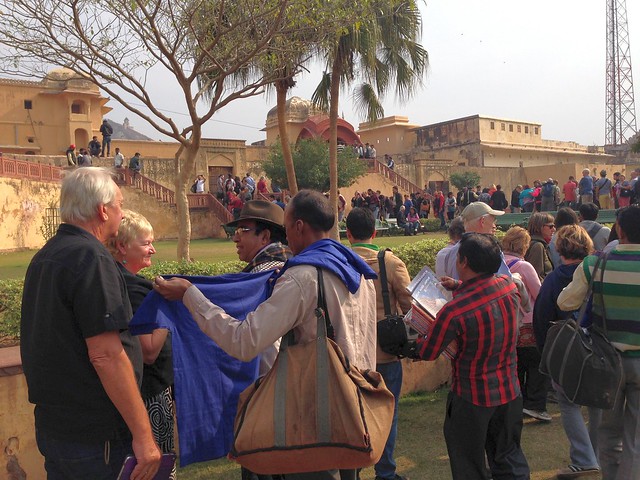 It could be argued that the ride is a tourist trap... 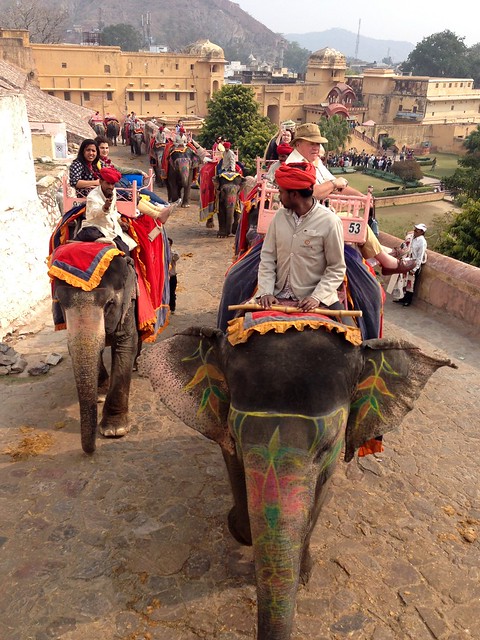 but the impressive view that can be seen by being on top of the elephant proved that it was a worthwhile experience. 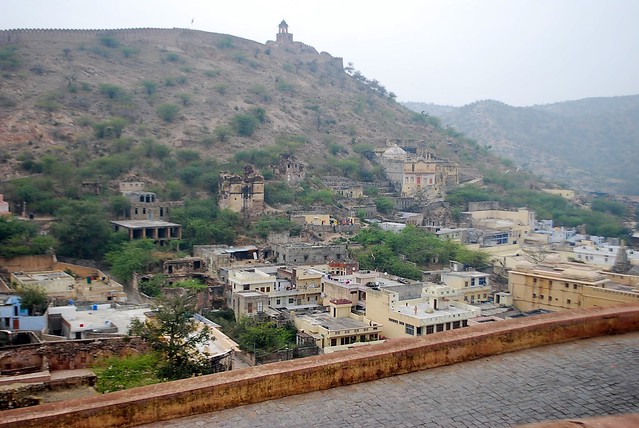 We were dropped by the elephant at Jaleb Chowk, the main courtyard of Amber Fort. From there we climbed a few steps... 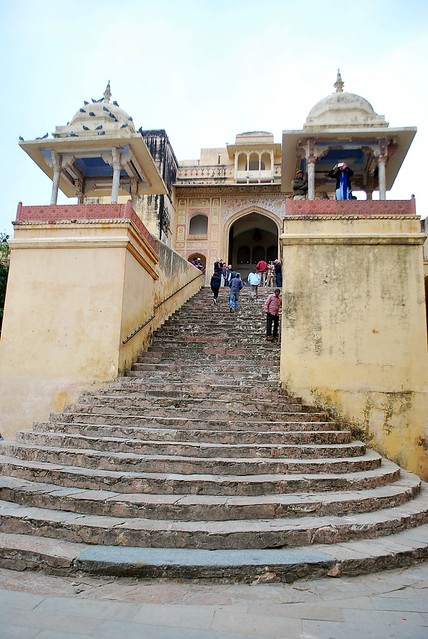 and were greeted by the magnificent Ganesh Pol, the main entrance gate of the Amber Palace. 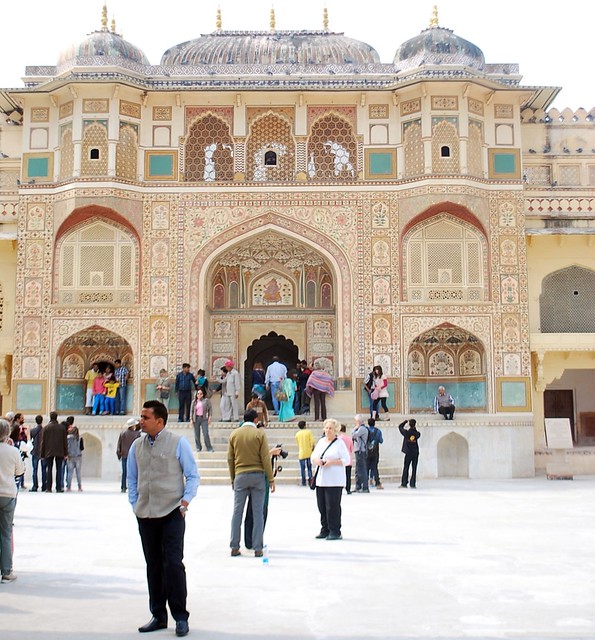 From there, we headed straight to one of the highlights inside Amber Fort... 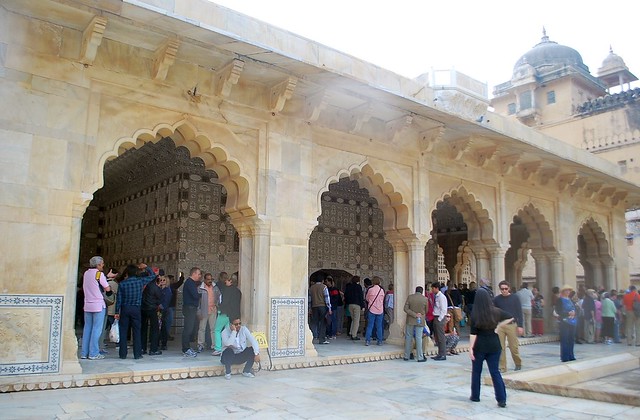 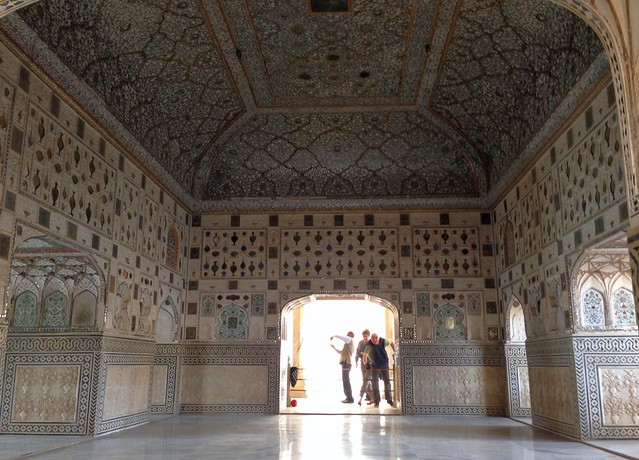 Sheesh Mahal is a dazzling architectural wonder made of glass with different colors, shapes, and sizes... 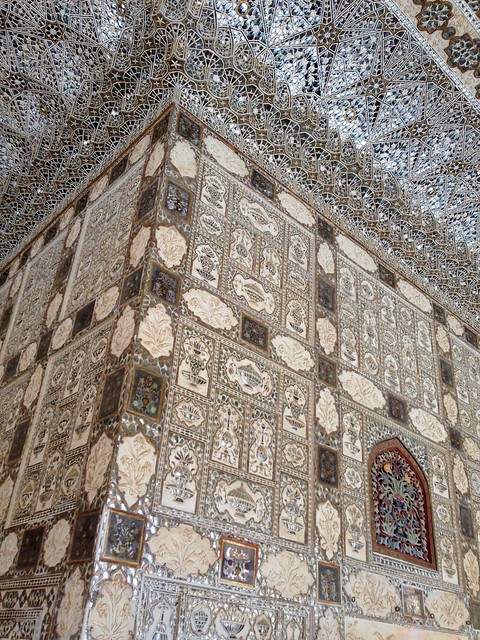 thus, it's only fitting that it's called the Palace of Mirrors. 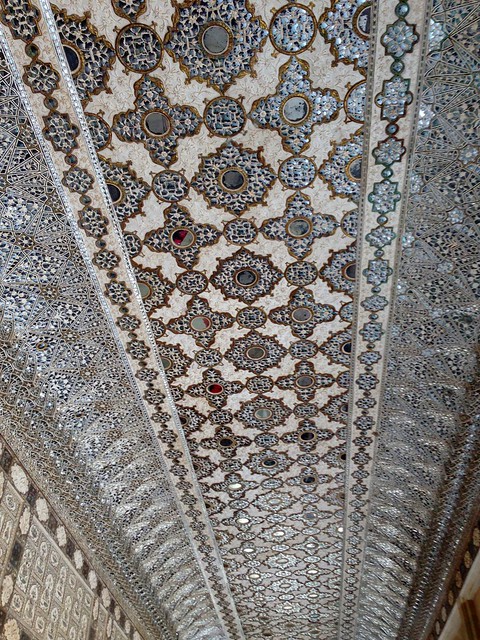 We moved deeper inside and got to appreciate some of the more interesting elements of the fort:

Jal Mahal is the summer palace of the Maharaja located in the middle of Man Sagar Lake. We just took pictures from a distance as it is not easily accessible to tourists. 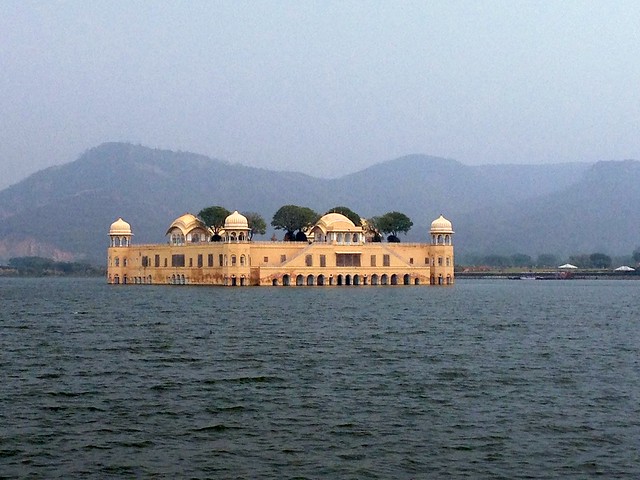 3. NAHARGARH FORT
Nahargarh Fort is one of three forts in Jaipur and it houses Madhvendra Palace. The palace has 9 chambers and legend has it that this was where the Maharajah kept his mistresses. 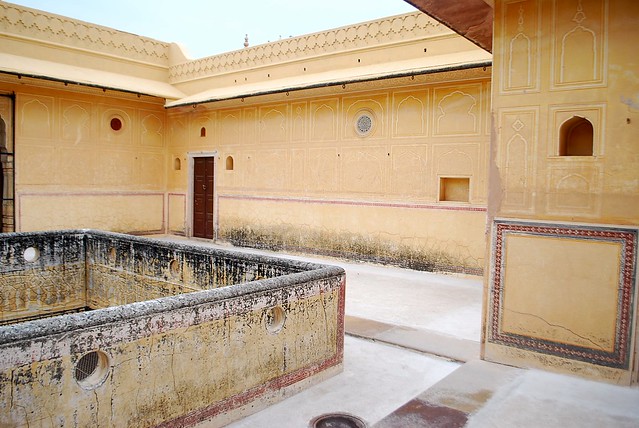 Nahargarh Fort is worth a visit as it offers sweeping views of the city:

4. JANTAR MANTAR
Jantar Mantar is an observatory of astronomical instruments built by a Rapjut King between 1727 to 1734. It's part of the UNESCO World Heritage list and is considered as the largest, most significant, and best preserved astronomical observation site in India. 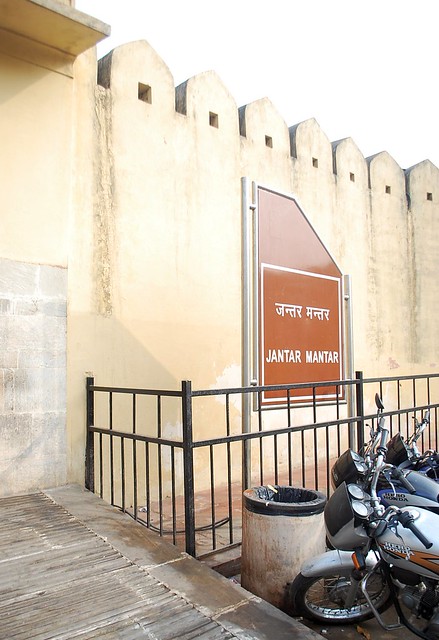 Some of the instruments at Jantar Mantar were invented and designed by the Maharaja himself! I was very impressed with the time, effort, and resources he dedicated to the study of celestial objects. 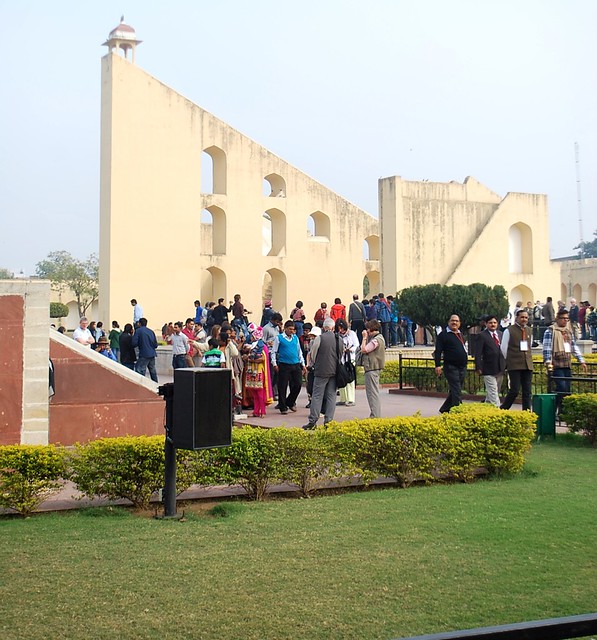 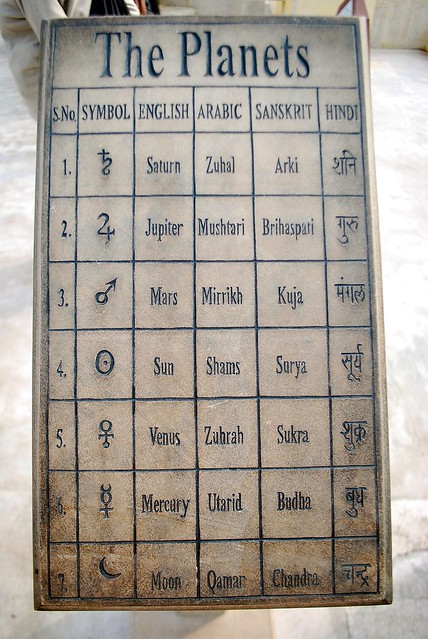 5. CITY PALACE OF JAIPUR
The City Palace was the seat and residence of the Maharaja of Jaipur. It was built between 1729 and 1732 with Indian and European influences. 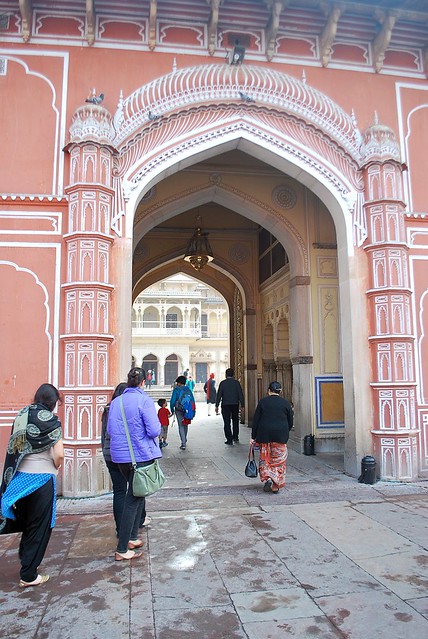 We toured the residence of the Royal Family and it displayed memorabilia of the King and Queen. The Hall of Public Audience was the most impressive room but sadly picture taking was not allowed.

There's a building inside City Palace that nurtures local talent called Friends of the Museum. Jaipur artists (painters, jewelry designers, etc.) all sell their wares under one roof making it convenient for tourists to buy authentic Indian handicrafts.

We exited the City Palace via the Pitam Niwaa gate. Check out how intricately adorned it is: 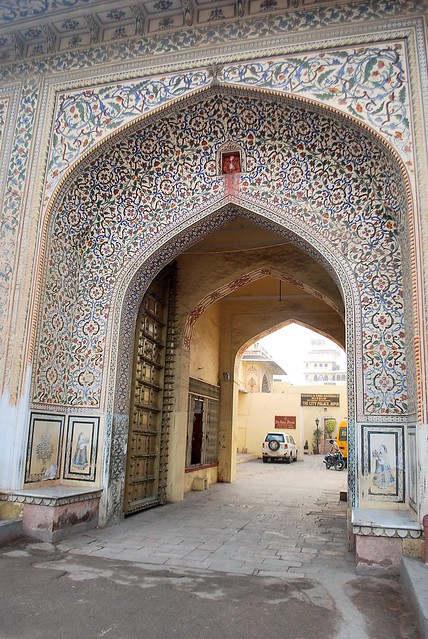 6. HAWA MAHAL
Hawa Mahal is called the Palace of Winds because its windows allow the wind to flow, keeping the palace cool. It was built for the ladies of the court to get a glimpse of the daily activities in the streets without being seen. We only saw Hawa Mahal while inside a moving vehicle but it was already enough for us to marvel at what is considered to be Jaipur's most awe-inspiring sight. 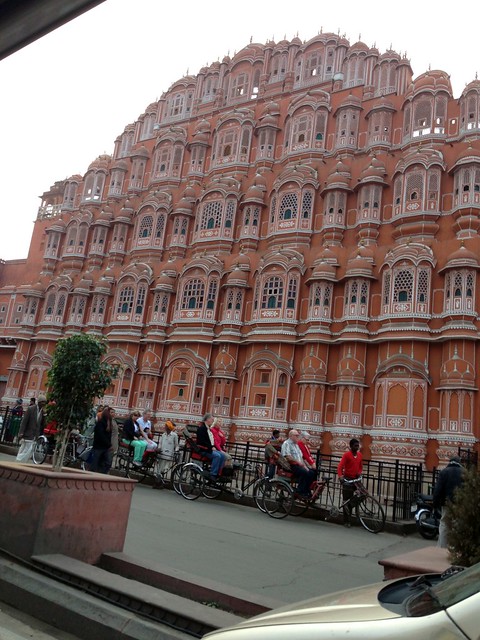 After visiting the sights, we allocated some time to go shopping. We first visited Jaisalmer Arts and Crafts. It is a good place for wholesalers to go since the store export jewelry to all parts of the world. 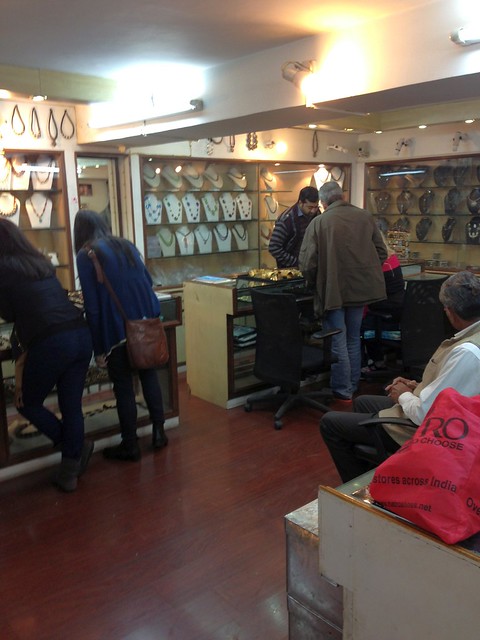 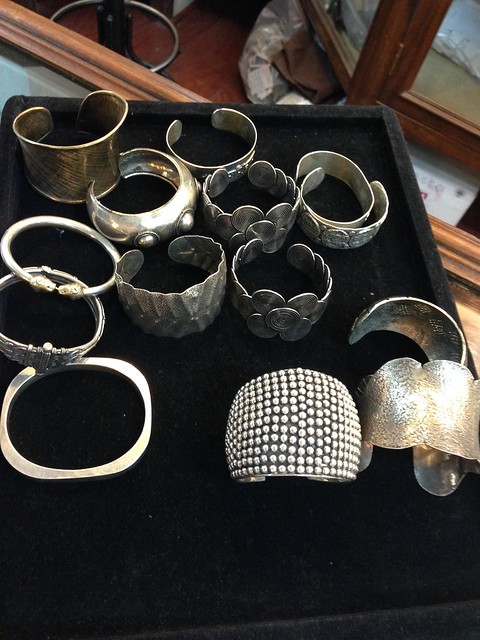 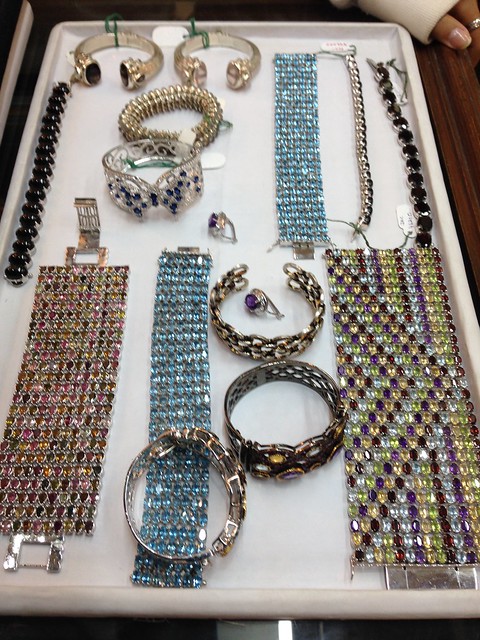 Anokhi, on the other hand, offers tastefully designed and quality clothes, scarves, and other accessories that are distinctively Indian. It mostly caters to tourists but price points are reasonable. 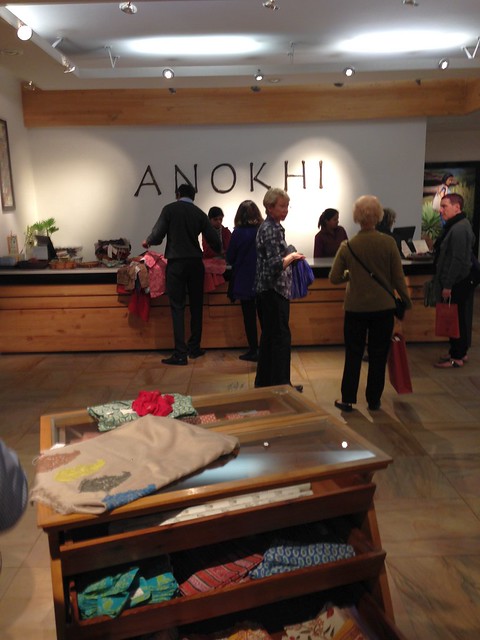 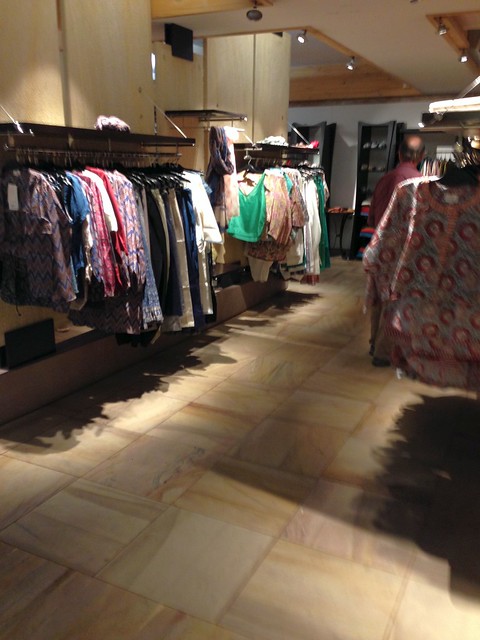 One day in Jaipur was certainly enough to cover and get a feel of the city. Among the Golden Triangle cities, Jaipur was the least memorable but it certainly is still a must visit.

Posted by Glutton Is Me at 5:49 PM No comments: 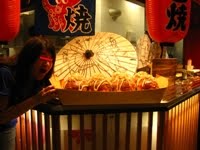